Light and powerful: the new JF365 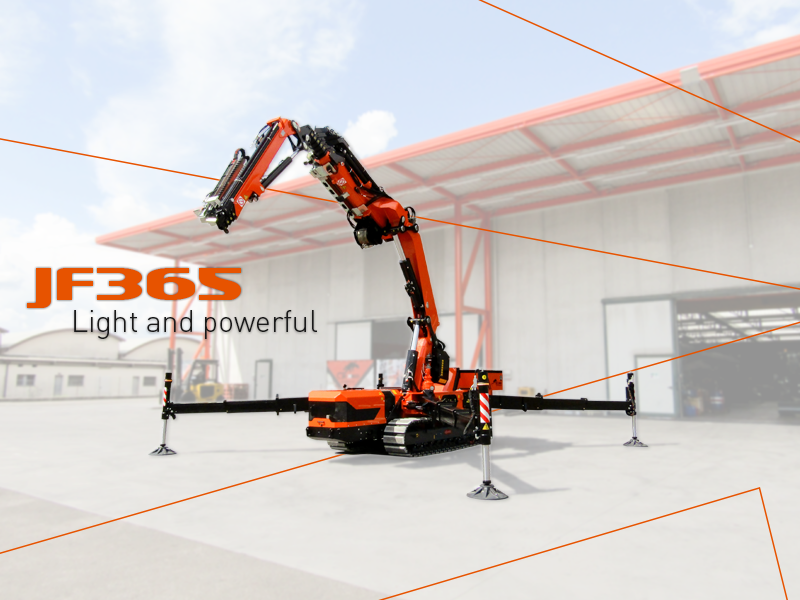 Following the success of the JF545, the market debut of a new, even more competitive, better performing and lighter model, thanks to the absence of a counterweight.

The innovative and revolutionary drive of Jekko shows no signs of stopping, and following the commercial success of the JF545, the market sees the arrival of the new JF365. A model which re-interprets the concept of its “big sister”, but sets new challenges in terms of performance, compact size, multiple applications and versatility.

The JF365 represents a further evolution of the species: it is even more competitive in terms of compactness and performance, thanks to the absence of a counterweight.

Following the success of the JF545 – explained Alberto Franceschini, Sales Manager for Jekko – we decided to maintain the same format and the same configuration, substituting the crane element with one of Fassi’s best sellers, the F365, which operates in the same way as the 545 but without a removable counterweight, resulting in a more compact and lighter crane while offering the same performance.

The reduced weight and dimensions allow the JF365 to operate in tight spaces such as town centres, in the industrial sector, for fittings in restricted work-site areas or in particular lifting situations close to walls, as rotation is confined to the area of the machine, without the bulk of the counterweight.

The JF365 has a fixed base with a load capacity of 3 tons. It offers the same options as the JF545: Proportional radio controller, hydraulic activation for accessories, stability control with infinite possibilities for stabilisation, 1 smaller and lighter jib which allows for the installation of a platform on the main arm.

Range of use
The JF365 is a crane which can work either horizontally or vertically, overcoming and working around obstacles, with the use of either the hook or the winch. It is also possible to use a manipulator for sheets of glass, and either a 3-person hydraulic platform used with dual articulation or a 2-person basket with the jib, for heights of up to 29 metres. The hydraulic activation of the jib allows for the installation of any additional option.

Super accessibility in tight spaces
The founding concept is the bringing to the ground of equipment which is usually mounted on a truck. This allows for increased accessibility and a reduction in size, with a significant positive impact on logistics. It is therefore possible to transport and use an articulated crane in all areas which cannot be accessed by a truck, such as: industrial areas, town centres with narrow streets, fenced parks, etc.

Infinite lifting possibilities
Jekko has developed software which allows for the stabilisation of the crane via infinite combinations. Each stabiliser can be set as desired in terms of angle and extension. One of four stability levels is automatically calculated according to the position of the stabilisers and the consequential tipping axis, with 1 being the lowest level of stability and 5 the highest, with reference to four different classes of pressure

One crane – one operator
The crane can be managed entirely by a single operator thanks to the use of a radio controller, which is effectively an extension of the machine that is always within reach. This allows the operator to carry out all operations in complete autonomy: activation/deactivation, crane manoeuvres, stabilisation, jib integration.

Motor: both diesel and electric
The JF365 has both a 55 kW Kubota diesel engine, and a 13 kW three-phase electric motor. According to the situation and to requirements, the operator can easily switch between one or the other with considerable flexibility, for either internal or external use.

Competitive advantages
Such a versatile crane can be used in the most varied of situations: special lifting conditions, fitting operations in restricted work site spaces (beams, mezzanines, glass, air conditioning systems, etc.) or in industrial areas (machinery of varied size), maintenance and servicing.

It is the perfect machine for companies which specialise in lifting, integrating an existing fleet of truck-mounted articulated cranes and city cranes, as well as for companies specialised in the rental of equipment with or without an operator. It is ideal for those specialising in niche operations, with high and extremely particular demands, but is suitable in general for all those wishing to exploit the typical advantages offered by an articulated crane in areas which are inaccessible for a truck. In general, the market demands smaller machines which offer the same lifting capacities as their larger counterparts, for obvious reasons of cost, potential, logistics, maintenance and ease of use. The new JF365 was created for this very reason.

We will be launching this crane on the German, Scandinavian and central European markets, naturally without neglecting Italy – explained Franceschini – The JF365, and the JF545 before it, are cranes which are a great source of pride for us, as on an industrial level we were the first to introduce this revolution to the market and now many brands in the crawler market are following in our wake. This means that we have chosen the right direction, obviously following the philosophy of Made in Italy.

< BAUMA 2019: Innovation and Green Solutions The new SPK60, one crane with two souls >
For additional information